Keyboardist Kyle Cross may look like a bad boy with his tattoos and piercings, but he’s really the good guy who’s always stuck fixing his band’s problems and never gets the girl. His band is competing in a college Battle of the Bands, but when their bassist doesn’t show, Kyle must track her down with the help of the person he least expects: his ex-girlfriend Alexis Monroe.

Kyle hasn’t seen Alexis since she dumped him in high school, and she’s dropped her preppy image for fiery red hair and a bold new attitude to match. With only hours before his band goes on stage, Kyle has to be a little bad if he wants to win both the Battle and the girl he’s never gotten over. But when their old problems resurface, the good guy might just get his heart broken all over again.

“My car’s over here,” Alexis said, leading me to the other side of the parking lot.

“The same one as before?” We’d spent so much time in that old Mercedes back in high school. Truth be told, I was kind of excited to see it again.

“Too bad. We had some good memories in that car.”

“We did.” She gave me a sly smile. “Some very good memories in the backseat.”

I coughed and tried to steer the conversation back to something less dangerous, but all I could think about was when we’d been together. “Remember that time we got lost on our way home from a concert in Pomona? And we ran out of gas in a shady part of LA and had to wait for Jared to come get us?”

“I remember. I was scared we were going to get carjacked, so you helped…distract me.” She met my eyes. “You were so very good at distracting me.”

Suddenly, all I could think about was how I’d like to distract her now. First, I’d tangle my fingers in that long, thick hair, getting a good hold of it. Then I’d tilt her head back so I could press my lips to her neck, to that spot just below her ear. She’d moan my name, and I’d work my way down, lower and lower, dipping inside the V of her shirt to taste every inch of skin I’d seen earlier. She’d reach for the front of my jeans and—

Whoa there. None of those things could happen. I could not get involved with Alexis again, and the only way I’d get through the night was to banish those thoughts entirely. Why was she even bringing all of that up again? Earlier she’d mentioned wanting to catch up, and now she was flat-out hitting on me. Did she want to get back together or something?

We stopped at a black MINI Cooper with white racing stripes across the hood. Not a car I’d ever picture her driving. Hmm, maybe she had changed.

“Nice car,” I said. “Not much room in the backseat, though.” Wait, why had I said that? It’s like I couldn’t stop myself from flirting with her, either.

“I bet we could still fit.”

Her eyes swept over me again, and it took all my energy not to press her back against the side of the car and devour her. I was so, so tempted to make a move, even though it was a terrible idea. Being around Alexis was causing my brain to not function properly. I wanted to blame my growing hard-on for rendering me stupid, but that wasn’t the entire reason. All the memories of being with Alexis, combined with seeing her again, were turning me into a sentimental fool.

I cleared my throat and tore my gaze away. “Let’s just find Becca, okay?”

“Sure,” she said, but she sounded disappointed. Hell, I was, too. I wished I was more like Jared and could do random, meaningless hook-ups, but that wasn’t me. If I got a taste of Alexis, I would only want more and more. I had to stop this now before it went any further. 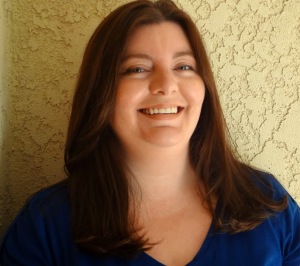 Elizabeth Briggs is a full-time geek who writes books for teens and adults. She plays the guitar, mentors at-risk teens, and volunteers with a dog rescue group. She lives in Los Angeles with her husband and a pack of small, fluffy dogs.

To get info on upcoming books, plus giveaways and other exclusives; sign up for Elizabeth’s newsletter.

One thought on “Book Blitz ~ ‘More Than Exes’ by Elizabeth Briggs.”