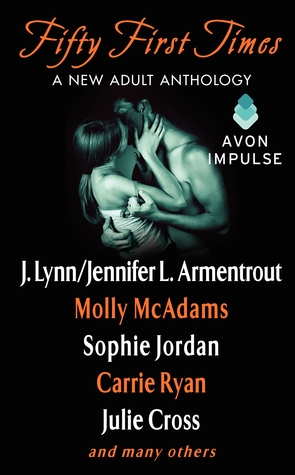 You always remember your first time…

Whether it’s the couple who decides not to go through with it, the two boys who finally aren’t ashamed, the newlyweds whose wedding night could very well be their last night together, the deaf pair who have no choice but to take body language to a new level–or, of course, the two young lovers fumbling and laughing, getting everything wrong. These are the memories that will never fade.
Join nineteen fantastic authors as they pull back the curtain and give you a peek inside that one intense moment in their characters’ lives when everything changes and nothing will ever be the same again.
Featuring stories from some of the hottest names in New Adult, Young Adult, and Romance including New York Times Bestselling authors J.Lynn/Jennifer Armentrout, Molly McAdams, Sophie Jordan, and Carrie Ryan.
NOTE: These stories are works of fiction. If you want to know about our first times, you’ll have to buy us a pet monkey first.

Enter below for the chance to win the brilliant Grand Prize Set.

$25 gift card for either Amazon, Apple, or B&N (winners choice)
e-copy of Fifty First Times gifted through Amazon Kindle*below books will be paperback unless only hard cover is available, also note some books including the featured title are for readers 17-18+
Entire Tempest trilogy by Julie Cross
Letters to Nowhere by Julie Cross
Hourglass by Myra McEntire
Forest of Hands and Teeth by Carrie Ryan
Be with Me by J. Lynn
Gone Gone Gone by Hannah Moskowitz
Stealing Harper by Molly McAdams
Catching Liam by Sophia Bleu/Genn Albin
Need You Tonight by Roni Loren
A Little Too Much by Lisa Desrochers
Foreplay by Sophie Jordan

The first time we met was when we stood at the altar.

Now I know what you’re thinking, but really it wasn’t like that. I was the Best Man, she was the Maid of Honour. I know, cliché as anything. It’s something we are teased about even now, five years later.

“Should have been you two getting married that day.” Their friends said, “Probably would have lasted longer than the ones who actually tied the knot.”

Sadly, it was true. The happy bride and groom captured within photos and distant memories of that day were no more. Divorced, and arguing over custody of their two children.

Maybe our story won’t seem so special to others. Maybe the promise of a passion-filled love at first sight, where lustful looks are exchanged in the lead up to the most exhilarating sex of their lives, is what draws people in more, but that wasn’t us.

We met at the altar where our best friends were being tied together for what should have been the rest of their lives. She was wearing purple, something she till moaned about when she looked at the photos, and I was uncomfortable in a too-tight shirt and a cravat tied smartly around my neck.

It’s true when people say those suits make you feel like a penguin.

I don’t actually remember the ceremony. I just remember watching her as she fussed over the flowers that the bride had flung her way, and how she’d focused hard on keeping upright as she wobbled in the highest and thinnest pair of heels he’d ever seen.

(As soon as the photos were finished, she’d kicked them off and replaced them with a pair of flip flops she’d hidden away in her handbag. I remember it well because she’d leant onto my shoulder as she reached to pull the offending heels off her feet.)

I remember everything about that day, the day I met my future wife, standing at the altar smiling shyly , not lustfully, when she caught me looking. No promise of mind-blowing sex in celebration of our friends marriage. Just a shy smile from a beautiful woman.

Author’s Note: I took the prompt for this story a little differently, as I’m really not a very exciting person, and this lovely guy in my head just wanted the story of how he first met his wife told.

I hope you enjoyed. 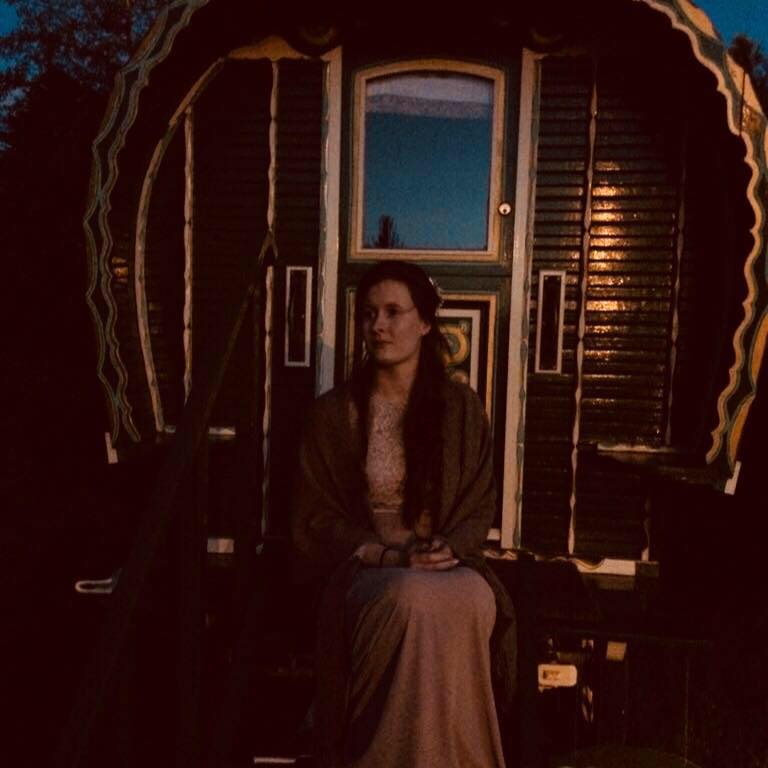 Have just started ‘The Tombs of Atuan’ by Ursula Le Guin for the #leguinalong (hosted by @afrolicthroughfiction ) and I just had to share a photo of the two maps that start this book! The Labyrinth of the Tombs is just stunning! 💛 As a teenager, I saved up for months to buy a map of Middle Earth to put on my bedroom wall. It’s rolled up nice and safe now, to keep the edges from ripping, but the Hobbit in me absolutely loves pouring over it! 💛 Do you have a favourite literary map? 💛 #books #bookstagram #booksofinstagram #bookish #bookishfeature #maps #literarymaps #bookishmaps #earthsea #leguinalong #readalong #ursulaleguin #thetombsofatuan #bookworm #lovebooks #booknerd #bookobsessed #tbr #currentlyreading #lockdownreading #fantasybooks
“I am going to tell you a story you already know. But listen carefully, because within it is one you have never heard before.” 💛 #QOTD - Is there a theme that always gets you excited in books? #AOTD - Music. I am such a sucker for a musical backstory, particularly ones in a historical setting. So this book was a must-read for me! I’m looking forward to fitting it into my TBR in July, unless I add it into #makeyourmythtaker 🤔. And just look at this stunning cover. 💛 #books #bookstagram #booksofinstagram #coverlove #bookish #bookishfeatures #owlcrate #owlcrateunboxing #bookworm #lovebooks #bookobsessed #booklover #booksellersofinstagram #booknerd #marielu #thekingdomofback #music #mozart #makeyourmythtaker #readathon
Happy Monday Bookworms! It’s a bank holiday here in the U.K. so the perfect excuse to dig into a good book (not that I need an excuse!) 💛 My favourite escapist reads are books within books, or books about books, like ‘The Starless Sea’ by Erin Morgenstern, and ‘The Shadow of the Wind’ by Carlos Ruiz Zafón, and I’m so excited to read ‘The Ten Thousand Doors of January’ by Alix E. Harrow next month! They always get me so excited to start writing my own stories. 💛 What are your favourite reads for escapism? 💛 #books #bookstagram #booksofinstagram #favouritebooks #shadowofthewind #carlosruizzafon #erinmorgenstern #bookish #bookishfeature #mayreads #haveread #bookworm #lovebooks #booknerd #booklover #bookobsessed #thestarlesssea #thetenthousanddoorsofjanuary #tbr #amreading #reader #bookishlife #typewriter #bookseller #booksellersofinstagram #booksellerrecommends #lockdownreading #modernclassic #fiction
Here’s my @Believathon wrap-up! 💛 From now on May shall be known as ‘In May I Read Middle Grade.’ I’ve had so much fun with all my books for this readathon, and it’s also made me read some more books that I’ve had on my shelf for far too long! Here are the prompts that I read each book for. 💛 The Poachers Pocket Inn ~ A Pinch of Magic by Michelle Harrison. 💛 The Yellow Brick Road ~ A Little Princess by Frances Hodgson Burnett. 💛 Baba Yaga’s House ~ The House With Chicken Legs by Sophie Anderson. 💛 The Deepwoods ~ Beyond the Deepwoods by Paul Stewart & Chris Riddell. 💛 Mermaids Lagoon ~ ‘A Sprinkle of Sorcery by Michelle Harrison. 💛 The Brolly Rail ~ The Train to Impossible Places by P.G. Bell. 💛 Black Ice Bridge ~ Brightstorm by Vashti Hardy. 💛The Book Keeper’s Stronghold ~ Tilly and the Lost Fairy Tales by Anna James. 💛 Biggest thanks to @gavgav7 for the incredible readathon! Bring on Believathon III 💛 #books #bookstagram #booksofinstagram #bookish #bookishfeature #believathon #readathon #booknerd #bookworm #lovebooks #bookobsessed #bookstack #middlegradebooks #booksellersofinstagram #booksellerrecommends #kidsbooks #apinchofmagic #asprinkleofsorcery #alittleprincess #thedeepwoods #pagesandco #brightstorm #thetraintoimpossibleplaces #thehousewithchickenlegs
It’s #raedathon a 24 hour readathon hosted by @jadeyraereads which is the perfect excuse to hide away and get some reading done. I’ll be finishing off ‘A Sprinkle of Sorcery’ by Michelle Harrison, and maybe fitting in a reread of this little gem! 💛 During lockdown, my thoughts have constantly been returning to ‘A Room of One’s Own’ by Virginia Woolf. I think it may be the vivid descriptions it evokes when she walks through the colleges of Cambridge that are making me wistful to return to my haunting of these places. I miss those balmy summer evenings, walking by the river, surrounded by history. 💛 Do passages from a book ever make you homesick for a place you haven’t returned to recently? 💛 #books #bookstagram #booksofinstagram #raedathon #readathon #amreading #currentlyreading #aroomofonesown #virginiawoolf #tbr #bookish #bookishfeature #literature #essays #feminism #favouritebooks #bookworm #lovebooks #bookobsessed #booknerd #cambridge #writing #writersofinstagram #typewriter #bookseller #booksellerrecommends
It’s getting close to the end of @believathon and I’m dying to squeeze this one into my TBR! Considering how fantastic and addictive the first book was, I’m sure I’ll be speeding through this one! So I’ll be sneaking back to the Mermaid’s Lagoon for ‘A Sprinkle of Sorcery’ by Michelle Harrison. 💛 In this book we return to the Poacher’s Pocket and the Widdershins sisters, Fliss, Betty and Charlie. Never ones for a quiet life, they are soon thrown into another magical adventure which may end in unimaginable danger. 💛 How is everyone else’s Believathon TBRs going? 💛 #books #bookstagram #booksofinstagram #believathon #bookish #bookishfeature #bookishlife #readathon #tbr #currentlyreading #middlegradebooks #kidsbooks #asprinkleofsorcery #michelleharrison #bookworm #bookdragon #bookaddict #lovebooks #booklover #bookseller #raedathon #booksellerrecommends #booksellersofinstagram #favouritebooks #lockdownreading #sequels #bookobssesed #bibliophile